CO2 emissions in the UK have reduced 68% between 1990 and 2018 1, demonstrating that efforts to decarbonise the power generation sector are enjoying by far the most success to date. This advanced state lends electricity generation well to being the sector where hydrogen has the most bankable applications in the near-term. The applications of hydrogen in the power sector are diverse, and as with the move to renewables, this sector has the potential to lead the way in new low carbon technology.

Small scale tests have already been carried out with government funding to test the production of green hydrogen from offshore wind, including at Orsted's Gigastack demonstration in Denmark and at the Hornsea 2 project in the UK. The production of hydrogen from renewables has the potential to be an interesting solution to the subsidy-free environment emerging in Europe, providing an alternative additional revenue stream to corporate or utility PPAs. With an active global market for hydrogen already in existence, commercial banks could view long-term hydrogen sales contracts with investment grade counterparties akin to long-term power purchase agreements, providing a stable revenue stream based upon which financing can be raised.

To-date however, the cost of producing green hydrogen from renewables is estimated at between EUR 3.5-5.0 per kg compared to EUR 1.5 per kg for grey hydrogen. Whilst there may be appetite from some existing hydrogen buyers to 'buy green', ultimately price is key and until the price of green hydrogen is comparable with the market

The production of green hydrogen also has the potential to play an important role in stabilising energy supply as the roll-out of renewables continues and the challenges of managing the intermittency of renewables increases.

Hydrogen as an energy store can be used not only to meet intraday peaks in electricity demand, but can also be stored long-term to manage seasonal peaks in demand along with the seasonal differences in renewables output, with solar power production higher in the summer and wind generation higher in the winter. This is a key advantage for hydrogen over batteries which can store energy shorter term and can support the wider transition to renewables. However, whilst a valuable addition to the energy mix, there is currently no framework to monetise this energy storage, a similar challenge as is currently faced by battery storage projects in Europe. To raise financing against large scale energy storage projects, investors and banks would need to see a contracted revenue stream for energy released from storage rather than being reliant on the market price for power. 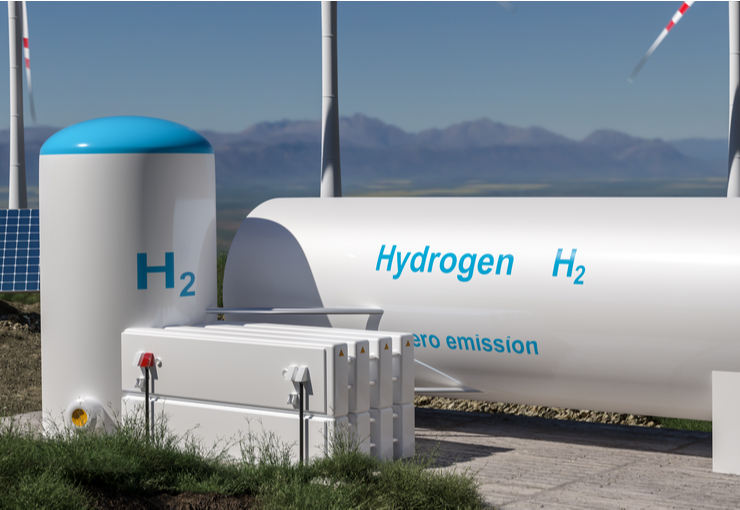 Hydrogen, in the form of ammonia, can also be transported globally to meet energy demand. The applications of this are potentially significant. Australia has recently announced plans for the H2U project in Queensland, which will utilise existing LNG production and export infrastructure to produce and export green hydrogen and ammonia at scale. Proposed offshore wind hubs in the North Sea which are not connected to a grid at all, but rather produce hydrogen for export to multiple countries, demonstrate the potential scale of application. However, such solutions could not currently be competitive with grey hydrogen and in the future would need to be developed in tandem with the increase in demand for hydrogen from other sectors transitioning to use hydrogen as a fuel source.

In the near to mid-term, blue hydrogen has an important role to play in the transition to a net-zero economy.

Whilst Europe has successfully developed renewables at scale, there has been limited success in developing a solution to low-carbon baseload power generation. Combining natural gas-fired power stations with steam methane reformation to produce hydrogen, which could be sold, and carbon dioxide, which could then be stored using carbon capture and storage technology, offers a relatively quick route to decarbonising baseload power generation.

The challenge for investors is making the investment case stack-up. Development of new-build CCGT's in Europe has stalled since the mid-2000s as the economics and uncertainty of revenues did not support investment.

However, consultation by the UK Government in 2019 indicated support for CCUS may become available, potentially in the form of a Contract for Difference or Regulated Asset Base model. This, combined with a potential revenue stream from the sale of blue hydrogen, could make such investments more compelling. Blue hydrogen would also likely be cheaper than green hydrogen in the mid-term, making it more cost competitive with grey hydrogen. It should be noted, however, that this business model will only work if the market price of blue hydrogen exceeds the marginal cost of production. Banks will certainly be comfortable with CCGT technology and have historically spent some time getting comfortable with CCUS technology; therefore if acceptable Government support for this should be rolled out, it represents a potentially viable option for low carbon power generation in the near-term. Such developments will also support the development of other hydrogen in other sectors as more hydrogen becomes available, until the production of green hydrogen is scaled-up.