Head of Research and Strategist for MENA

In recent years, attention has shifted to the economic opportunities that the Middle East and North Africa could offer investors.

The most obvious example of such interest is the proposed flotation of Saudi Aramco, which has drawn frenzied speculation for months. Crown Prince Mohammed bin Salman's strategic vision for Saudi Arabia - Vision 2030 - would further open up the country to significant foreign investment. A Saudi Aramco float is just one small piece of a wide strategy of structurally adjusting the economy away from the reliance on hydrocarbons, which are inherently volatile commodities.

And yet geopolitical uncertainties within the region, long a deterrent for overseas investors, remain abound. Rather than improving in 2018, all signs point towards an escalation in tensions that will undoubtedly have an impact on global markets and investor attitudes towards the region.

There are a number of reasons why.

Firstly, the lack of coherent foreign policy vision from the U.S. towards MENA encourages regional powers to explore alternative partnerships and assume greater responsibility for their own long-term interests. Saudi Arabia, for example, is deepening its relations with Russia, China and Japan. Egypt and the UAE are taking the first steps toward establishing military cooperation with Russia.

Perceived waning American influence will lead to the fragmentation of the region's approach to foreign and economic policy.

Already competition is heating up. Saudi Arabia, Egypt and the UAE look set to establish an Arab-centric regional security architecture that could marginalise Qatar, Turkey and Iran.

The Qatar impasse also shows no signs of abating, with a diplomatic resolution far from likely at this stage. Indeed a swift resolution to the standoff appears increasingly remote, particularly due to recent heightened animosities between the two sides, which is likely to widen what has become already a deeply polarized stalemate.

Secondly, risks emanating from the Yemen war are likely to prove more challenging this year. The assassination of former Yemen President Ali Abdullah Saleh may lead to an intensification of the conflict, which could result in additional missile launches from Yemen against Saudi Arabia.

Finally, efforts to contain Iran by amending the Joint Comprehensive Plan of Action (JCPOA), while also curbing the state's regional activity are inherently destabilising. Markets were apprehensive when President Trump demanded radical changes to the JCPOA, threatening that the U.S. will leave the deal if his terms are not met. The deadline for action is 12 May, when the next sanctions waiver is due. This will be an important moment for future regional stability.

Regional powers also face the challenge of navigating lower-for-longer oil prices. Whilst most MENA oil exporters have sufficient savings to cushion the sizable adjustment needed to structurally adjust their economies to a more sustainable model, the prolonged period of lower oil prices are testing available buffers, highlighting the risks associated with the continued dependence on the cyclical nature of oil and gas revenues.

All in all, MENA regional activity will continue to be dominated by lower oil prices and geopolitical uncertainty throughout 2018. All eyes will undoubtedly remain focused on how these dynamics unfold in the region. 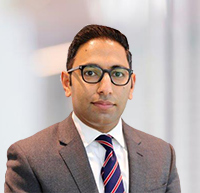